Marcia M. Henry was appointed as a United States Magistrate Judge for the Eastern District of New York on May 10, 2021.

Immediately prior to her appointment, Judge Henry was at the New York State Department of Financial Services in the Cybersecurity Division, where she supervised policy initiatives related to cybersecurity regulation and enforcement in the financial services industry.  Before that, Judge Henry served for over seven years as an Assistant U.S. Attorney with the U.S. Attorney’s Office for the Eastern District of New York, where she prosecuted complex federal crimes, including international narcotics trafficking, money laundering, and wire fraud, and was the district’s first Opioids Coordinator.  Before joining the U.S. Attorney’s Office, Judge Henry practiced labor and employment law at Seyfarth Shaw LLP and Rao Tiliakos LLP in New York.  Prior to law school, she worked at J.P. Morgan Chase & Co. in human resources and diversity program management.

Professor Joseph Thai teaches and writes about constitutional law and the Supreme Court.

Prof. Thai served as law clerk to Justices John Paul Stevens and Byron White of the Supreme Court and Judge David Ebel of the U.S. Court of Appeals for the Tenth Circuit.

He frequently engages in civil rights litigation and served on the legal team that successfully challenged Oklahoma’s same-sex marriage ban a year before the Supreme Court upheld marriage equality nationwide.

Jorge F. Gonzalez is a former judicial clerk to Judge Jimmie V. Reyna of the U.S. Court of Appeals for the Federal Circuit (2019-2020). After completing his clerkship, Jorge returned to Finnegan, LLP, in Washington, D.C., where he had worked as a patent litigation associate since 2015.

Jorge recently accepted an in-house position at AbbVie, Inc., where he serves as patent litigation counsel. Jorge manages biopharmaceutical patent litigations, both offensively and defensively, in courts and tribunals worldwide. Before attending law school, Jorge worked at Gilead Sciences as a formulations specialist developing pharmaceuticals to treat Hepatitis B and C and HIV/AIDS.

Jorge is co-chair of the Intellectual Property Law Section for the Hispanic National Bar Association, and his family is from Puerto Rico.”

After she completed her judicial clerkships, Racheal practiced Federal Indian Law and Tribal Law as an Associate Attorney at Procopio, a law firm based in San Diego, California.

Racheal is currently an Associate Attorney at Earthjustice, the premier nonprofit public interest environmental law organization, where she advocates for the protection of endangered species and the environment on behalf of tribes and other clients.

Racheal is a member of the Rosebud Sioux Tribe and she grew up in Grand Island, Nebraska.  Before attending law school, Racheal completed a Fulbright research grant in Chengdu, China.

Jason Kurtyka, Current judicial clerk for the U.S. District Court for the Southern District of Ohio. 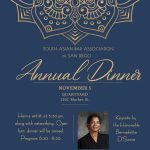 Annual Dinner 2021
How to Apply to be a U.S. Magistrate Judge